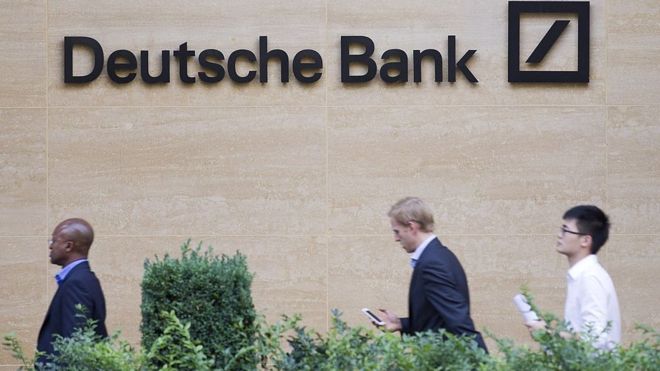 Germany's biggest lender is in exclusive talks for a 25-year lease on a new building.

Garth Ritchie, UK chief executive of Deutsche, told staff the move "underlines the bank's commitment to the City of London".

He said staff would start moving to the new UK headquarters in 2023.

The deal showed "the importance it attaches to being an employer of choice in the capital", Mr Ritchie said.

Deutsche Bank employs about 7,000 people in London, who are currently scattered across 15 different buildings.

It is in negotiations with developer Land Securities over the lease on a new building to be constructed at 21 Moorfields.

As Prime Minister Theresa May prepares to trigger Brexit talks on 29 March, some financial firms have stepped up plans on how to deal with any disruption.

This week, a senior Goldman Sachs executive said it would move jobs away from London and bulk up its European presence by "hundreds of people" as part of Brexit contingency plans.

The US bank, which is also in the process of building a new office in London, is planning to bolster some European offices before the UK leaves the EU.

Also this week, Deutsche Bank started a share sale to raise about 8bn euros (£6.9bn, $8.5bn) to bolster its finances.

On Tuesday, it was revealed that the bank had cut its bonuses by more than three-quarters last year, to 0.5bn euros (£433m) from 2.4bn euros a year earlier.